This study, PROGRESSIVE IDEAS FOR POP PLAYING FOR ACCORDION is especially designed to benefit the advanced student who is about to embark on a professional career, or one who has the ability to read and play music in the modern idiom, or any student who is desirous of creating a style of his own and develop his talents in the matter of improvisation. Students such as these may, to coin a term, be called «In-betweens» – those who have learned the general technical problems but who seek suggestions and ideas in the ultra modern idiom, in order to increase their knowledge of accordion technique – especially in the field of popular music.

The student who has more so-called «feel», but has less technique , will find that , by transposing the exercises in this book to various keys, his technique will gradually improve and his playing become more enhanced.

Anthony Mecca, an accomplished performer and instructor, who is thoroughly experienced in the execution of modern music has, herein, divulged some of his secrets and ideas in laying a solid foundation to the art of improvising and creating original introductions, modulations, turn-arounds, endings, etc.

In conclusion, we wish to state that we strongly and sincerely recommend this study for the advanced student, the embryonic professional or, for that matter, any aspiring accordionist with a certain amount of training ability – one who desires to become proficient in mastering the modern idiom. 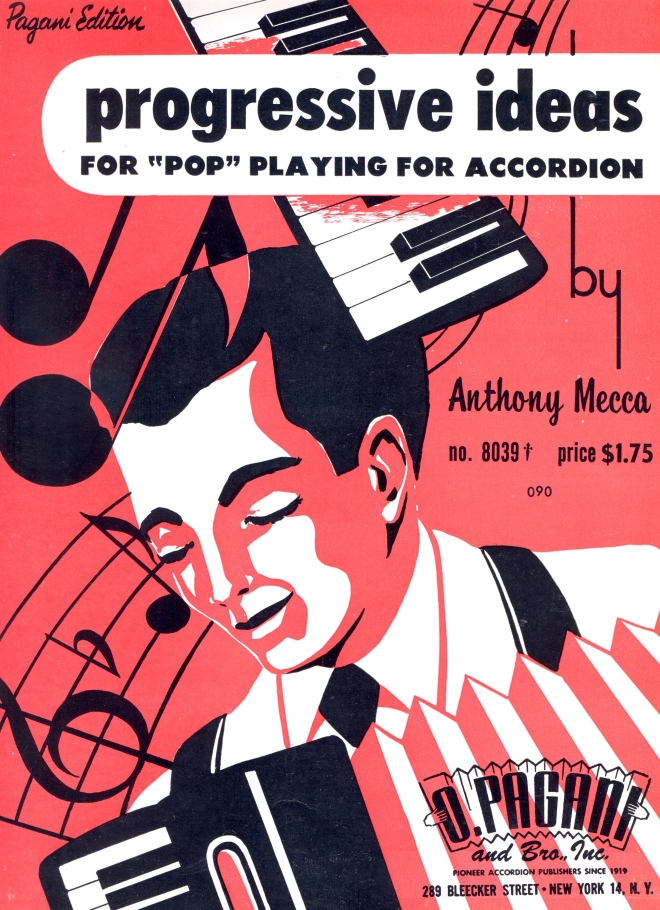 Anthony Mecca, native of Waterbury, Conn., came by his love for the accordion through his brother Dominick who was his first instructor when a mere youngster.

Decision to make the accordion his career, brought him to New York where he furthered and completed his studies with Joe Biviano, well known accordion virtuoso and instructor.
After his discharge from the army in 1946, Tony Mecca turned his attention to professional playing and soon was in great demand for radio and television work and recordings. He has worked under such famous conductors as Leonard Bernstein, Alfredo Antonini and Raymond Scott and has recorded for practically all well known record companies.

It is this back ground of study and experience that enables him to write this important and authoritative accordion work, which will soon be followed by other works in the popular field.